You are here: Home / Entertainment / Travel / Are Steampunk Cars Really a Thing?

If you are a true Steampunker, you know that the Victorians didn’t have cars taking them places. Instead, they had carriages or horses that they’d own or hire to take them from place to place. The first steam vehicle was the locomotive which was invented in time for the Victorian era. The steam locomotive began carrying passengers in 1825 in England, and then soon after in the United States. Therefore, Steampunk cars are really a modern invention, an anachronism that never existed in any form during Victorian times. However, it’s still fun to see what people make, and Steampunk cars are a lot of fun.

Here is a collection of the coolest Steampunk vehicles that we’ve found so far. We also wanted to include other pages that talk about Steampunk cars which you’ll find linked at the bottom of the page.

One of the most fun things about Steampunk cars is that they are totally made up, so they can be anything. These videos show you how creative some makers get when they make a working Steampunk car.

A lot of the information online are for the same vehicles, but we thought the image below would really impress you. Can you imagine the hours it took to make this? 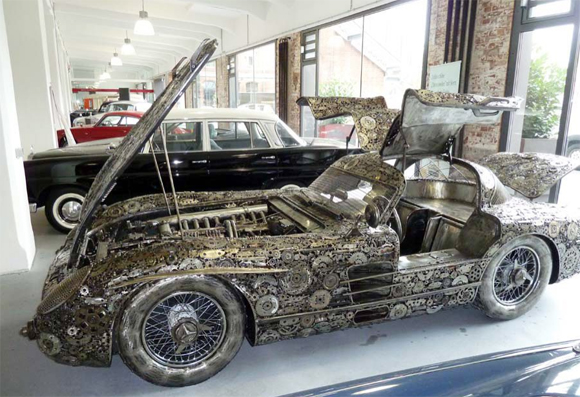 This is a still photo of the roadster in the video shown above. So impressive!

These articles primarily talk about specific cars and how they were made. There are some really unique Steampunk cars that are pictured, but you can also learn about how they achieved different effects when building the Steampunk cars from scratch.