Steampunk is so much more than just dressing up in cool and unique fashions. In fact, it can be a wholesome and fulfilling lifestyle. This segment is all about surrounding yourself with intriguing steampunk fairy figurines that not only embody all the core concepts of the Steampunk movement, but also look great doing it too.

Introducing our first breathtaking figurine, it’s easy to see why the Rebecca Air Voyage Statue is a best seller. The figurine weighs a measly 3.8 pounds and measures 10 inches tall, 8.5 inches wide and 6.5 inches deep. It portrays a dazzling, laid-back beauty clad in green dress and some ankle high boots. Sitting comfortably on her hand-painted and polished suitcases, Rebecca’s definitely ready to travel as see the world.

The name says it all; the Tabitha Steampunk Fairy measures only 9 inches tall and comes with an unmistakable high-quality gold coat cast resin that gives it quite the dazzling look. True to character, Tabitha is clad in her shoulder-less mini, killer Goth boots and those old-school aviator glasses. The fine detailing on this figurine is exquisite. 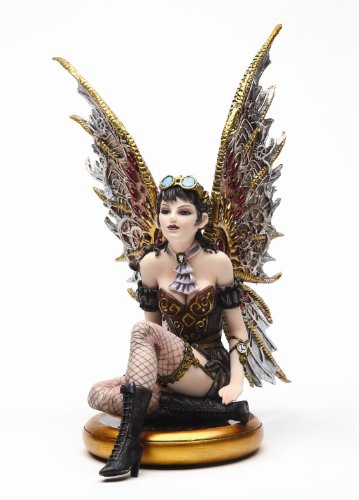 As our first standing fairy measuring 15 inches tall, majestic Jess comes to you clad in an elaborate outfit complete with an underbust corset and thigh-high stockings. Likewise, this gorgeous lady has pretty delicate wings made of gears, clogs, and all sorts of hardware. Jess looks like she’d feel right at home in a Steampunk airship.

This figurine displays a heck of a personality complete with a seductive pose. The new Wild Violet Mushroom figurine depicts a gorgeous forest fairy who seems willing to get down and dirty. This hand-painted, highly-polished figurine comes complete with a shimmering velvet frock and some leafy green wings to match. 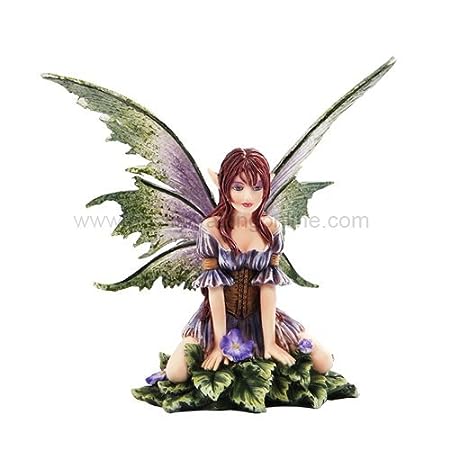 Amy Brown is known for her wild, delicate depictions of fairies. One that stands out is the Amy Brown Fantasy Periwinkle Flower Fairy Figurine. Measuring 6-inches high and weighing about 6.4 pounds, this might be Amy’s most delicate fairy. Her vulnerable nature is directly in contrast with her sharp and rigid wings. 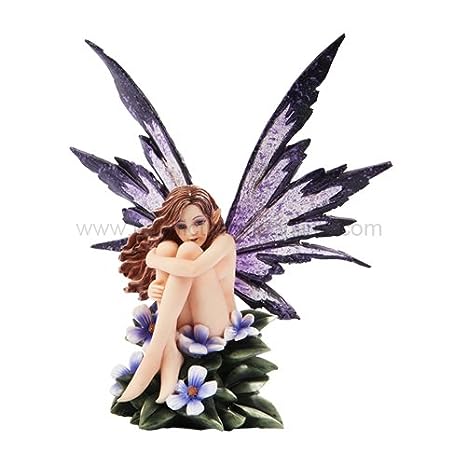 (Not currently available)
Ladies and gentlemen, it doesn’t get more steampunk than this. The Top Hat Fairy Riding Dragon Skull Statue boasts of exceptional craftsmanship with the wings being run by cogs and gears. Even the dragon is fully steampunk powered. 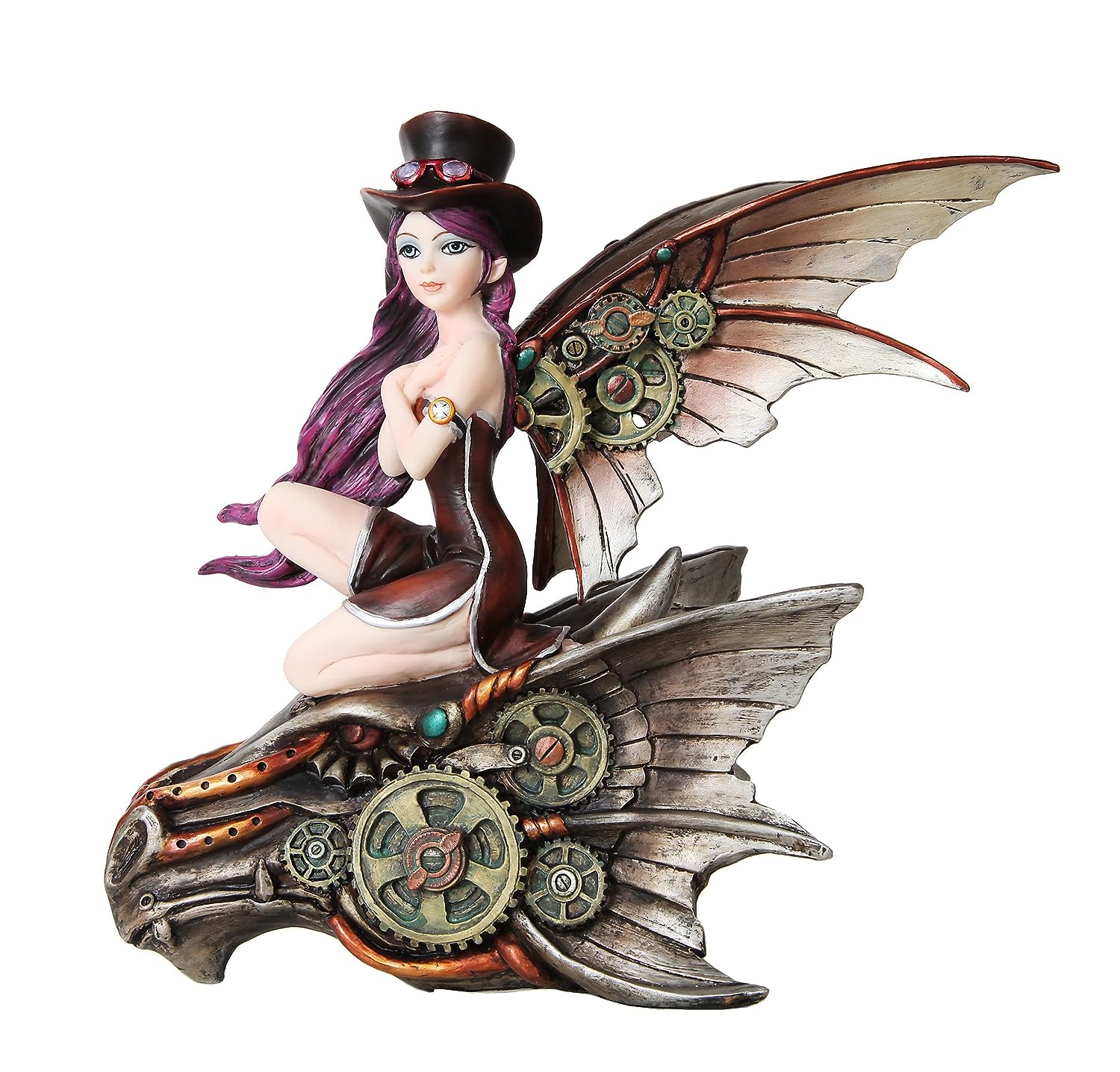 Okay, this isn’t a fairy, but we fell in love with it, so had to include it here. After all, who can not mention this gorgeous Steampunk dragon. I mean, it’s a dragon. Beautifully depicted with metallic painted colors on a resin figure, this Steampunk dragon is fierce. The dragon features gears at the joints of wings and legs. It measures H: 10 x W: 4.5 x D: 5.75 .

(Not currently available)
Here’s another great option for fans who enjoy steampunk. This figurine shows an authoritative diva with incredibly powerful steel wings and a metal jaguar for a pet. The bunker-like polished base gives you an idea of where she might feel at home. 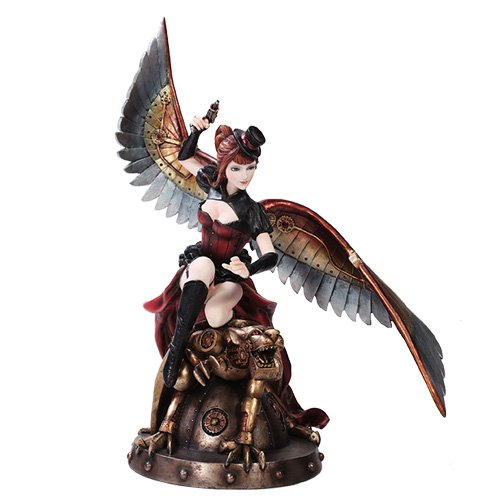 Draped in autumn colors, this Gothic Bat-Winged Fairy makes a lovely addition to your figurine collection. The figurine measures 17.25″ tall, 11″ wide and 6.75″ deep. It weighs about 4.5 pounds. All of the Amy Brown figurines are exquisitely detailed with lovely colors.

(Not currently available)
Standing proudly at 12-inches tall, the Aviator Fairy Pilot Assassin Figurine boasts of a designer composite resin and a hand-painted, polished finish that will make for a wonderful decorative gift. She’s clad in a red costume with magnetic falcon wings that can be detached. 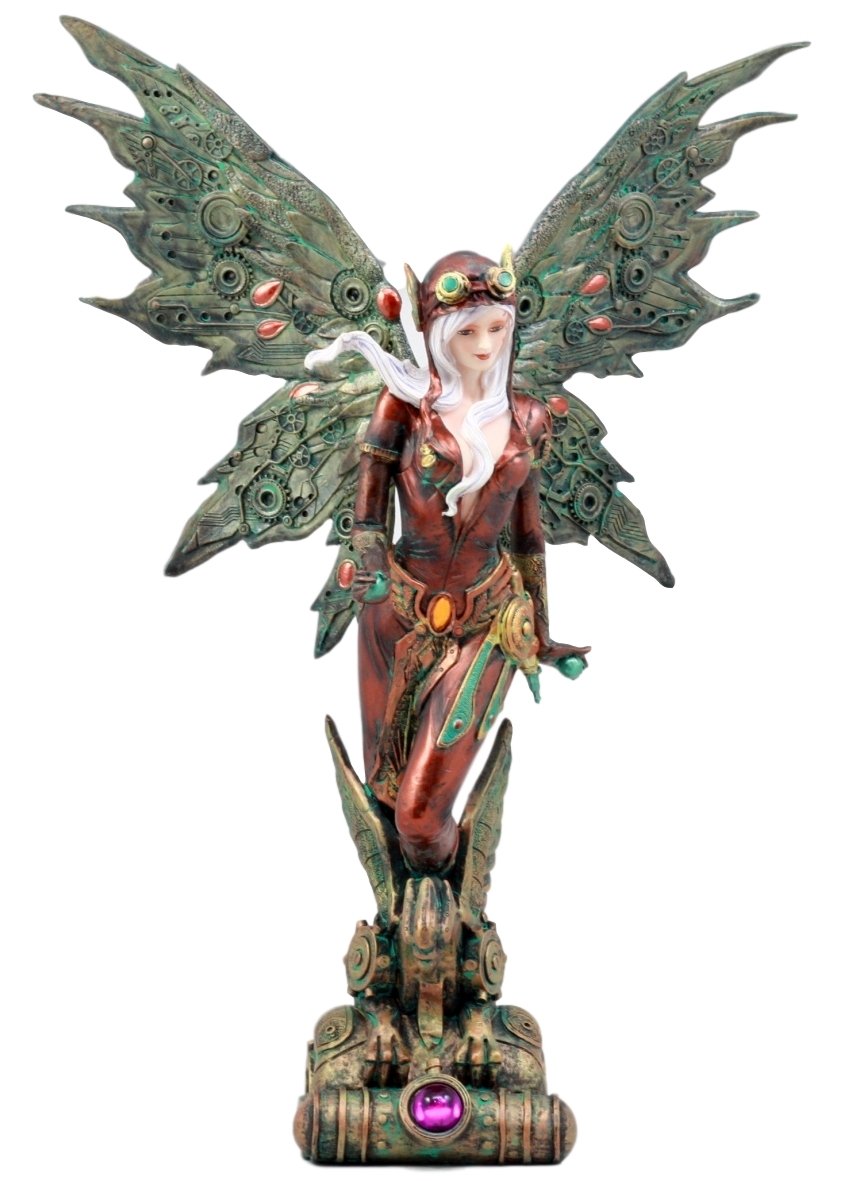 This fairy statue is 9.75 inches tall, and made to decorate your collectible cabinet or mantelpiece. This depiction is made of polyresin and painted. The colors and style of her dress make her more of a Gothic figurine along with her companion, the wolf. However, with her corset top, she definitely can be qualified as Steampunk and/or Victorian.

The Steampunk Dressed to the Nines Fairy Statue Figurine delivers absolute class and sophistication. This lovely lady is definitely dressed to the nines in a majestically flowing evening gown. She also comes with her very own gear-and-cog-steampunk jewel-embroidered wings. 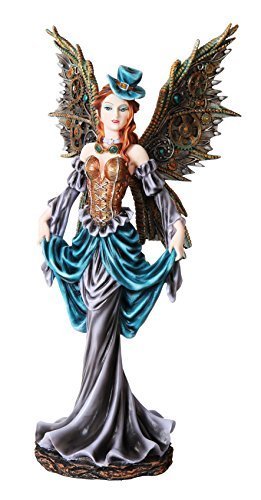 The Steampunk Fairy Pilot Statue is one of the largest figurines on this list. At 22-inches tall, the polyresin construction and larger wings bring the total weight to about 45 pounds. The statue shows a fairy clad in a flowing evening dress and corset performing a friendly, welcoming curtsy. 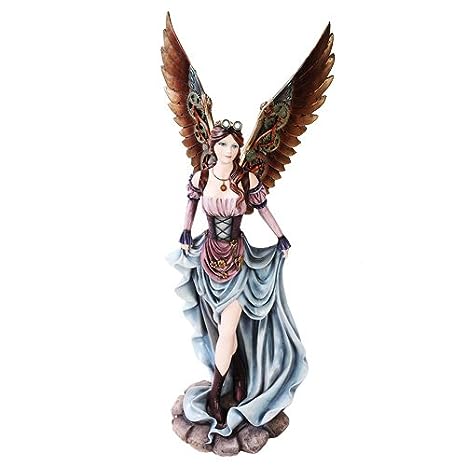 Measuring a whopping 23-inches tall and 25 pounds in weight, the Steampunk Dragon Fairy Assassin Statue is perfect for Steampunk decorating. It shows an armed Steampunk fairy with a tiny dress all suited up and ready for battle.

Perfect decoration for the Day of the Dead and/or Halloween, or any other occasion that you think is appropriate. Great for a couple who have a Gothic wedding or just love skeleton figurines. The groom statue measures H: 9.25″ L: 4″ W: 2.5″ and the bride measures H: 8″ L: 4″ W: 2.5.” He is the Steampunk gentleman in an aqua waistcoat, and she is in a matching corset and gown.

The Steampunk Fairy Sitting on Skull Statue portrays a sweet, innocent fairy brooding with her mechanical wings over a fierce metal dragon. 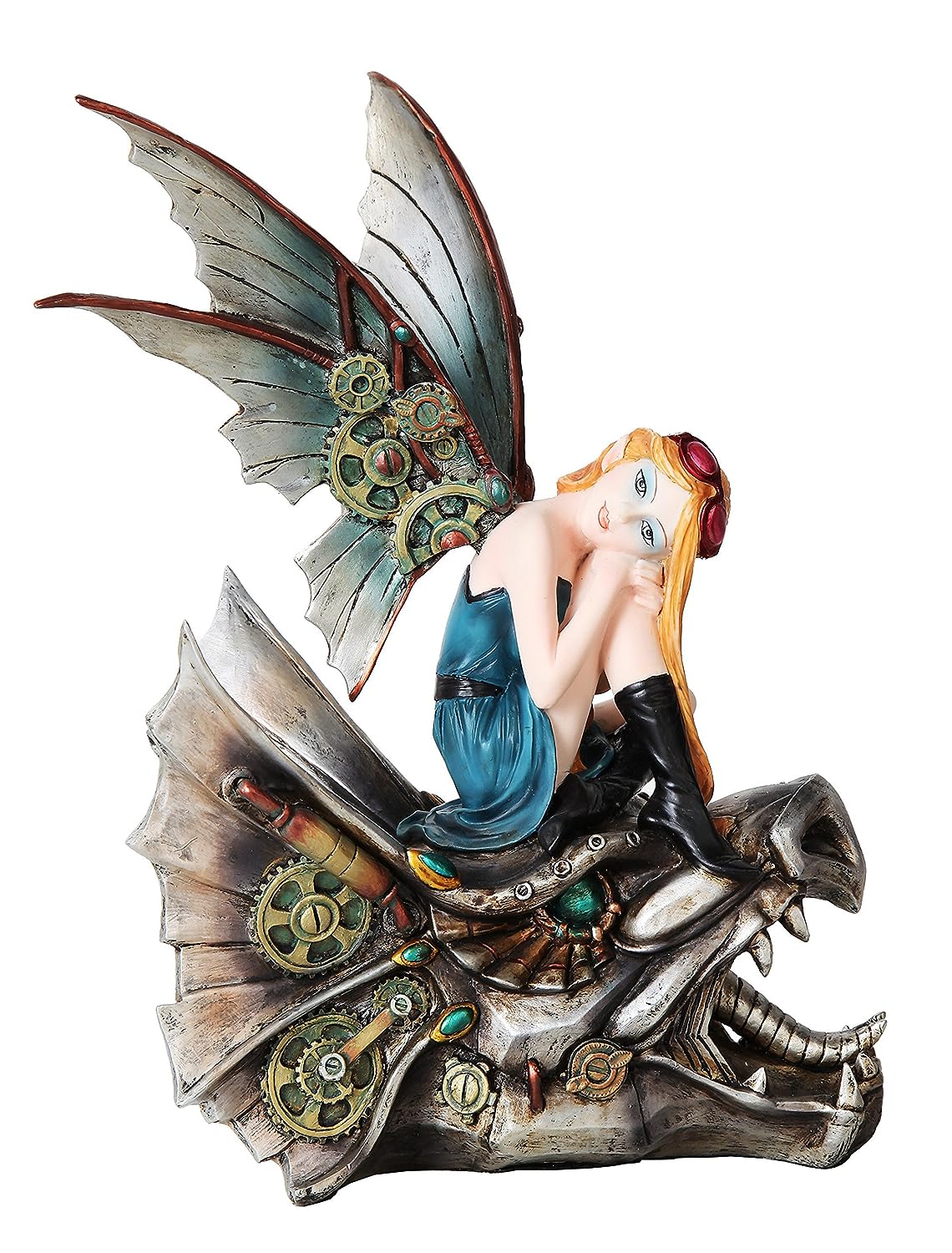 There’s a lot of dragon riders on the list today, but hey, who wouldn’t love to ride a dragon. This particular fairy, however, looks futuristic even with her trendy hero costume. Measuring 9 inches tall, this designer composite resin figurine will make an ideal addition to your collection. 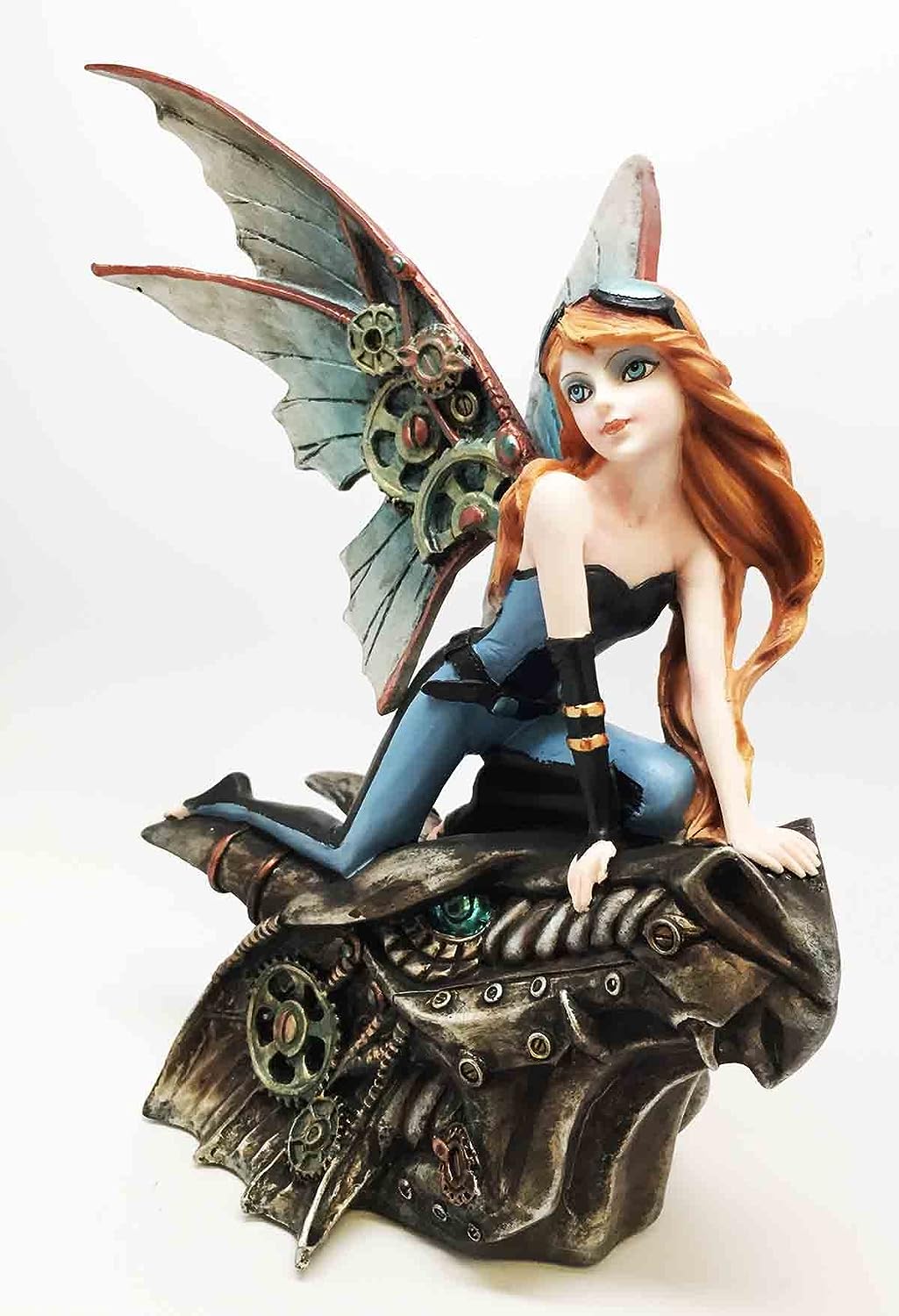 (Not currently available)
Standing tall at  26 inches, the Steampunk Fairy Surveyor Flight on Gargoyle Statue is our largest figurine here. This exotic, composite resin figurine is of a young, brave fairy carrying out some aerial recon on top of a gargoyle.

Looking for a fairy assassin for hire? Look no further than this beauty, decked out in full Steampunk gear including goggles, metallic wings and holding two guns. Base is also decorated with industrial gears and pipe.

This statue is 14 inches tall and weighs in at a measly 10 pounds. This figurine shows a metal-winged fairy resting with her pet in Steampunk attire. 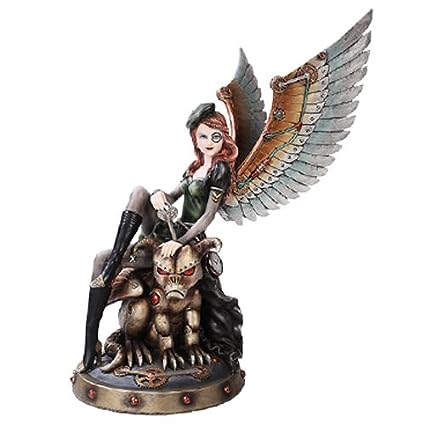 Her Steampunk Majesty never looked so great before. Complete with her incredibly detailed and gold embroidered dress, matching gold and black cog wings and a headpiece fit for imperial royalty, there’s no doubt who the queen really is. 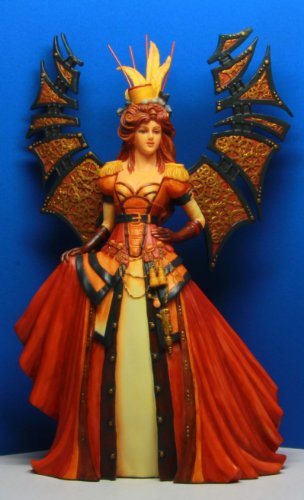 This figurine combines Steampunk with a Western vibe to create magic. You can tell from her cowboy-style leather corset and gear that she is ready to keep the peace. 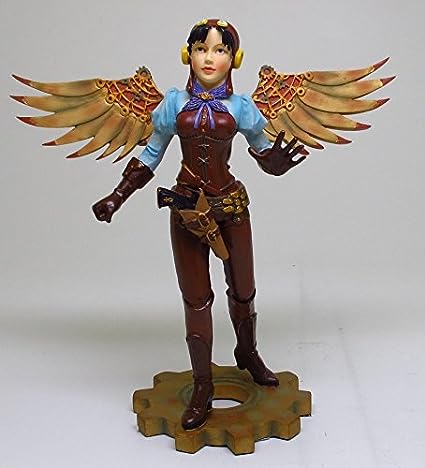 This figurine shows a Steampunk Lady clad in a leather corset and stretchy pants sitting on a beer barrel. You can tell from the cocked gun that she’s armed and ready for action. 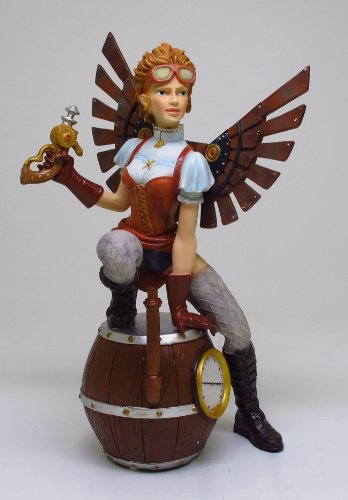 (Not currently available)
So, what do you get when you mix Steampunk with a femme fatale? You get this 12-inch fairy dressed in a fire red costume with a potentially dangerous wired orb for a chair. 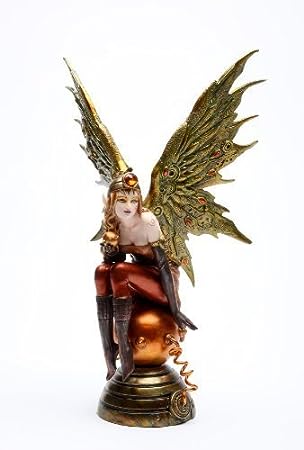 And last, but not least, not at all, is this lovely figurine of a drowsing fairy in a teacup. Made of designer composite resin and hand-polished, this fairy figurine is 5″ tall, 4.5″ wide and 3.25″ deep. Lovely for a kitchen decoration, or keep her with all of her fairy pals, after a good snooze we’re sure she will sleep off any leftover effects of imbibing too much nectar.

Save this Page for Later

Not ready to buy these figurines? Don’t worry, you can save this page for later by pinning to Pinterest. 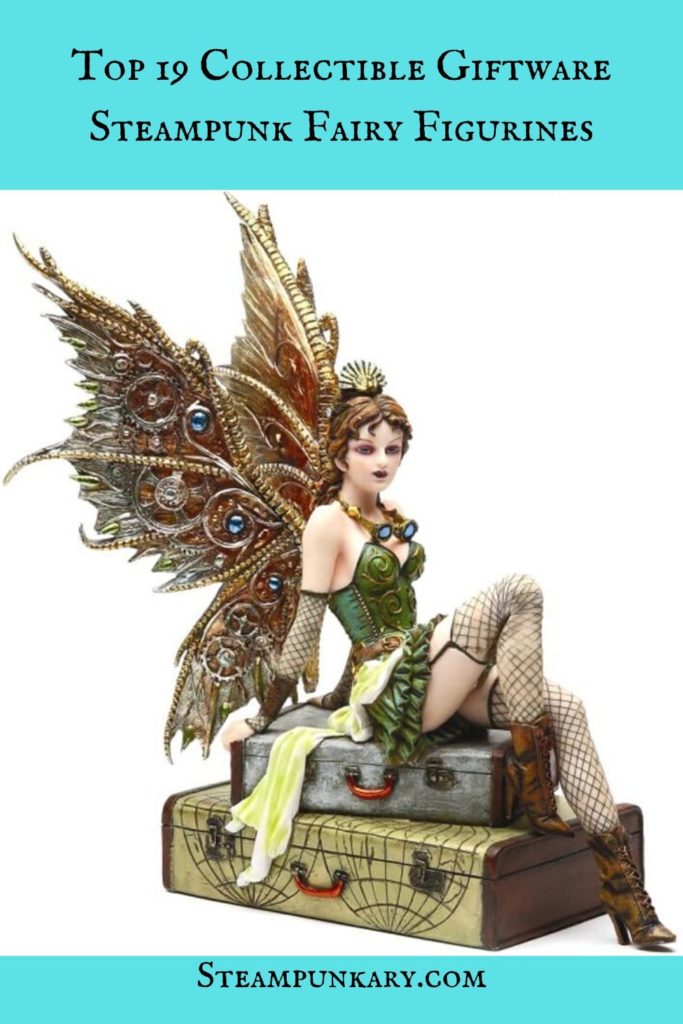