You are here: Home / Clothing / Kids’ Steampunk Costumes for Purim

If you are looking for unique kids’ Steampunk and vintage-style costumes for Purim, you will definitely find them on this page. To help you sort through which costumes are favorites, we are highlighting one of our favorite costume vendors, HalloweenCostumes.com. They have a whole section of costumes devoted to Purim for kids and adults, as well as many exclusive costumes that you can explore when shopping for Purim costumes. The site has an excellent search and browse function, so entering any search terms will narrow down your search. So let’s start with some Steampunk kids’ costumes that they have on their website. (Of course, you can browse any of our other costume pages by going here.)

We’ve stretched the boundaries in this section by selecting traditional Steampunk and Victorian costumes for kids, and also other costumes from around the same time period. You can always make a costume more Steampunk by adding Steampunk accessories. One of the best features of the HalloweenCostumes.com website is how easy it is to find accessories to add authenticity to your Purim costume. As you click through to any costume on the site, you will see related accessories on the side of the page. You can adapt many costumes for Purim by adding a tricorn hat or royal crown. All of the Steampunk costumes can be used for other costume parties including Halloween. Several of these kids’ Purim costumes have a toddler or infant version for younger kids. You can get more information about sizing and shipping on individual costume pages. You can also search for accessories separately.

There is only one Purim-specific costume on HalloweenCostumes.com which is shown below, the Queen Esther costume. However, we’ve included several costumes below that can be Steampunk period costumes, or are easily used for Haman, Queen Esther, King Achashverosh or Queen Vashti. The first costume shown below is called a Paul Revere costume, but it has a tricorn hat so could  easily be used for Haman. If you don’t like the Colonial style, we’ve included other “villian” costumes to which you can add a tri-corner hat. Some of these costumes can be used for other Jewish holidays including Passover (Pesach), for school plays or family events. That’s why we added the Egyptian and shepherd costumes. Besides, who says that Haman wasn’t a pirate at some point during his career. If you don’t want the entire costume, search for hats and other accessories here.

Save this Page for Purim Next Year

If you’ve come across this Purim costume page off-season, you can save it for next year. Just pin the image below to Pinterest to save for later this year or next year. 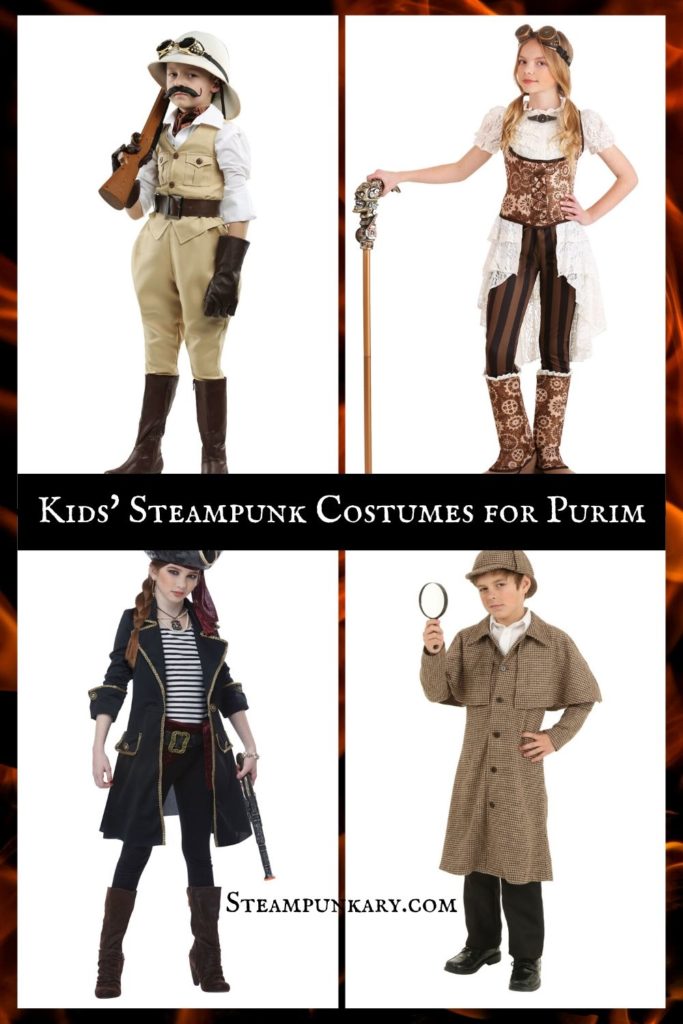