Mortal Engines is a novel that was published in 2001 and is the first book in a series of four novels for young adults written by British author Philip Reeve. Reeve is both an author and illustrator of children’s books and spent ten years writing the novel Mortal Engines, working on it in between his other writing and illustrating jobs. After taking on the project, he cut back on his illustration jobs to concentrate more on completing the novel. He currently lives in Dartmoor with his wife and son.

Reeve’s series of four novels are known as the Mortal Engines Quartet, the Predator Cities Quartet and the Hungry Cities Chronicles. The series takes place in a futuristic time period, referred to as the Traction Era. Earth is currently nothing more than a wasteland, having been devastated by a conflict known as the Sixty Minute War. Nations as we know them no longer exist, and cities are now mobile and have a fiercely independent nature. These mobile cities use powerful mechanical jaws to overtake other cities to take their resources. The nature of trade in this new age is mainly accomplished by use of airship, or takes place between mobile cities of relatively similar size that are unable to destroy each other. Together, these four books cover twenty years of the futuristic Traction Era. This book series is packed with action and adventure and is certain to be a huge hit with readers who are fans of the Steampunk genre of literature.

The first book, Mortal Engines, focuses on a post-apocalyptic, Steampunk version of London, which is now a giant machine attempting to survive in a world with very limited resources. In the novel, London has returned to a Victorian Age type of society that has been ravaged by the Sixty Minute War. The war has caused a massive geological upheaval producing earthquakes, volcanoes, and other unstable natural disasters. Mortal Engines won a Nestle Smarties Book Prize, the Smarties Gold Award, the Blue Peter Book of the Year Award, and the Blue Peter “Book I Couldn’t Put Down” Award. 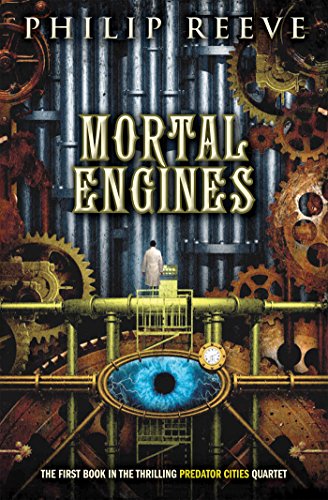 The second book in the series, Predator’s Gold, was released in 2003. Set in a time period two years after Mortal Engines ends, this book focuses on two lovers, Tom Natworthy and Hester Shaw, and follows them on their adventures across the world where they engage in trading. The couple does this while riding in the airship named Jenny Haniver, which had belonged to their deceased comrade. At one point, the Jenny Haniver is damaged and the couple is rescued by Anchorage, which was once a thriving trade city that has been devastated by a biological weapon. In this novel, the couple find themselves being pursued by League forces and must rush to escape them by heading north, leading them to land on the city of Anchorage. 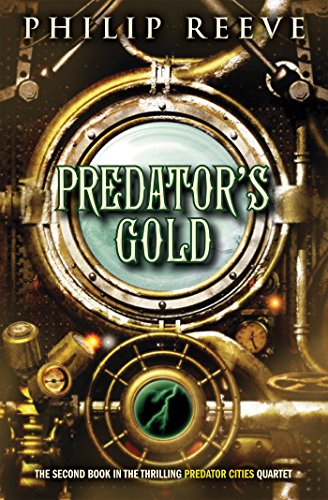 Internal Devices, the third novel of the series, was published in 2005. The story takes place sixteen years after the events in Predator’s Gold. Characters Tom and Hester have now raised a daughter during these years of peace, where they reside in Anchorage. Anchorage is now a static settlement known as Anchorage-in-Vineland, located on an island on what is now the Dead Continent. This island was unaffected by the fallout of the Sixty Minute War. The daughter of Tom and Hester, Wren Natsworthy, is currently a bored teenager who wants some adventure in her life, leading her to sneak out one night where she encounters three Lost Boys. This leads Wren to find herself in some serious trouble, and her parents have to head out to find her. 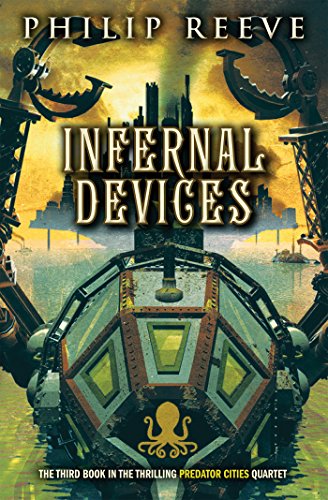 The final book of the series, A Darkling Plain, takes place six months after the events of the previous novel. This novel includes the signing of a peace treaty to bring about an era of peace and trade, and also sees Tom Natsworthy and his daughter, Wren, navigating the skies in the airship, the Jenny Haniver. Main character Tom also receives news that his failing heart means that he only has a few years left to live. A Darkling Plain won the Guardian Children’s Fiction Prize and the Los Angeles Times Book Award.

Fans of the Mortal Engines book series will be happy to know that there is a film adaptation of Mortal Engines that is scheduled for release on December 14, 2018. The film will be released in IMAX, Real D 3D and IMAX 3D formats by Universal Pictures and be directed by Christian Rivers. The screenplay was written by Peter Jackson, Philippa Boyens, and Fran Walsh. Mortal Engines is based upon the novel of the same name written by Philip Reeve.

The film’s plot centers on Millenia with most of the world having been devastated through a cataclysmic event. Remaining civilization has now had to adapt to a very different way of life, with gigantic moving cities roaming the Earth to find smaller traction towns and take their resources. The movie takes place in a post-apocalyptic Steampunk London which is mounted upon wheels and is fully mobile. The post-apocalyptic world now has very limited resources as a result of the Sixty Minute War and the remaining cities are now forced to prey upon smaller ones to rob them of their resources, a real survival-of-the-fittest scenario.

New Zealand filmmaker and director of the Lord of the Rings Trilogy, Peter Jackson, began the development of the Mortal Engines film in December of 2009. Production began in October of 2016, marking the directorial debut of Christian Rivers. Shooting of the Mortal Engines film began in March of 2017 in New Zealand. The cast will include Robert Sheehan starring in the lead role, with Ronan Raftery in a supporting role. The film also features Hera Hilmar cast as the female lead.

This film is certain to be a huge treat for the fans of the book series, as well as for movie goers who love action and adventure, as well as movies with a futuristic Steampunk theme.