While this costume is listed as a Brown Monk Robe, it can easily be used for any costume that requires a cloak or cape. You can wear it over a Steampunk costume as a cloak or as a magician or mage with Steampunk elements. In fact, this robe is so versatile, you should have it in your costume wardrobe for multiple uses. Also available in black.

For a Victorian or Steampunk gentleman, this cotton Steampunk shirt is a must. Wear it with your breeches and cloak, or add a Steampunk jacket over it. This shirt is only available in white. Click through for measurements and washing instructions.

Although this is listed as a Pirate Hat, it can also be worn as an American colonial hat. The pirate theme is a great match to Steampunk and can easily be jazzed up with Steampunk goggles or other elements for your Halloween costume or convention cosplay.

This costume is a little bit out of the Victorian era, yet we’re sure that there were plenty of thieves and highway men during the Victorian period. Whether you use the denim coat for a highwayman costume or to add to another Steampunk costume, you can see how versatile it would be. Another great add for your costume wardrobe.

This Blue Wool Pirate coat is perfect for a pirate cosplay or you can use it for other historical figures. You can create a lovely pirate costume with this coat and the hat shown earlier, and Steampunk it up with a cutlass or pistol, and Steampunk accessories pinned on the hat or coat. It is also available in gray with silver-colored buttons.

This Steampunk Wool Britannia Guard Coat is one of our favorites. Like the earlier pieces, it can be used with or without Steampunk-themed accessories. For regular wear, just pop it on over your shirt or sweater. For Steampunk wear, add some gears to the coat itself and then accessorize with Steampunk hat, boots, shirt and trousers. Love this piece!

These incredible Steampunk Black Cotton Pants have a 13-button flap front and matching suspenders. These pants work well with any 19th-century costume. It doesn’t matter whether you’re a pirate, English lord, or Steampunk soldier, these pants are a great foundation.  These will match with many of the other items on this page.

Museum Replicas doesn’t only make costumes for adults. They also have historical costumes and accessories for children and teens. This Edison Vest is made for youth sizes and can match other pants and shirts as well as a hat and goggles shown in the picture. Click through for sizing and measurements.

These German Airship Knickers make a wonderful foundation for a Steampunk Airship Captain costume. You can assemble the costume with items shown on this page. Or just pick up these knickers for a future costume. Click through for more information about sizing.

Your Steampunk Pirate Costume isn’t complete without this Black Brocade Pirate Coat. The fabric is a black-on-black brocade that has a rich look when worn. Shown here with a full pirate costume. You can also use this coat for a Victorian gentleman’s costume too.

This is a child-size Velvet Long Cape which is so versatile for Halloween or other costume occasions. Kids can use it to dress up for a birthday party or just for fun. Use it for a Mage or Wizard costume or on top of any costume that can use a cloak.

These Museum Replicas Madagascar Pirate Pants are great for a costume alone as shown below or match them with any of the shirts or jackets shown on this page. These pants are also available in a solid burgundy for harem pants. Lots of ways you can turn these into a Steampunk costume.

Not all women wore hoop skirts during the Victorian period, but if you want to have a hoop skirt for a Victorian Lady costume, this is a great addition to your costume wardrobe. This is a very comfortable piece to wear under a skirt or dress, better than just a wire form.

Even girls can be cool-looking pirates when they add this Mary Read Pirate Coat to their costume wardrobe. This coat is designed for costume or cosplay use with striking elements that give it a Victorian pirate ambience. Throw this pirate coat over leggings, boots and a shirt or vest. Then top of your Halloween costume with a jaunty Pirate Hat (shown above). Click through for measurements and sizing.

This beautiful cloak is made of heavy, Navy blue colored wool to give it a realistic shape and weight. You can use the cloak itself without any other accoutrements, or use it as an accessory to your Victorian gentleman costume. It also works well with many of the other costume pieces on this page including the Pirate costume pieces.

This shirt which comes in red, black and white, is just the thing that a pirate needs to complete his outfit before going plundering. You can also wear it if you aren’t a pirate, but escorting your noble Victorian lady to the ball. And there is no reason why women can’t wear this shirt also. Click through for sizing and prices.

This is our favorite jacket from Museum Replicas product line. It’s so easy to add it to a skirt to become a woman about town during the Victorian era. Add a hat and boots and you are ready to go out for tea. This Corset Coat works well with several costume assemblies making it a good choice to add to your costume collection.

Who can resist this Black Leather Steampunk Top Hat as a finishing touch to your Steampunk costume. You can add color to the hat with a scarf or Steampunk elements. To find out more about this hat, click through below.

Pin to Pinterest to Save this Page for Later

Interested in these costumes, but not for now? Pin this image to Pinterest to save it for later. 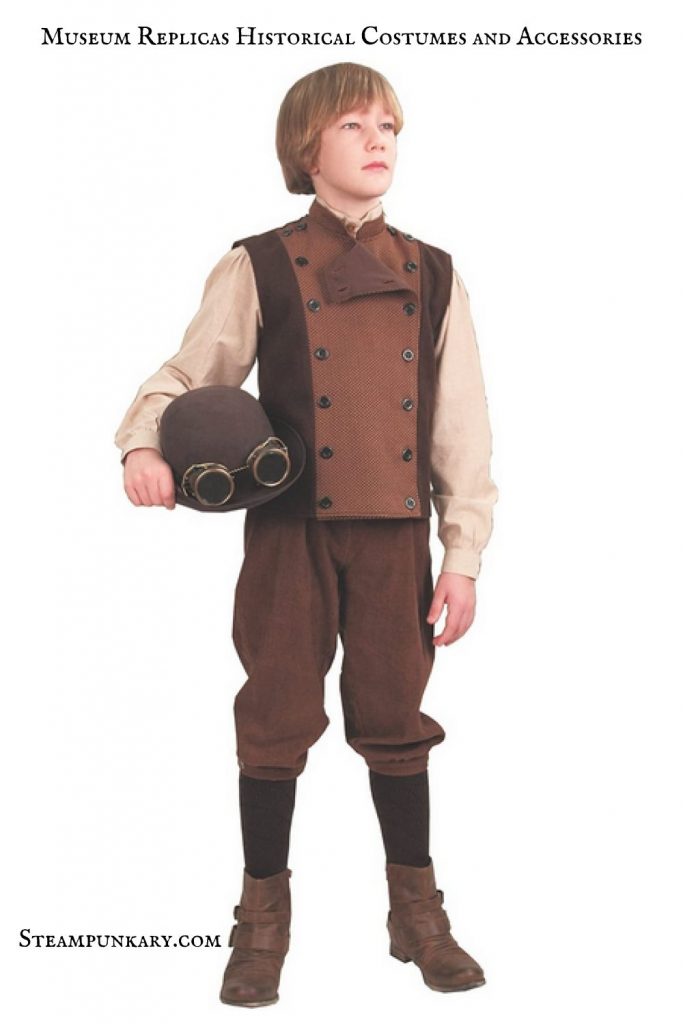